D he small pies made from a very simple dough are offered as snacks with various fillings all over New York - and in some cases take on gigantic proportions of tennis balls. Originally, Knish came from the Jewish cuisine of Eastern Europe and Russia and are much smaller. A typical poor people's meal, where you conjure up something delicious from a few cheap ingredients. Knish consist of a crispy, thin partial casing and are traditionally filled with cream cheese, meat or salmon. But the most popular stuffing is still potatoes. When, two or three times a week, Russian potatoes were on the table 2-3 times a week in the penultimate century, you probably always had a few leftovers that you could turn into a simple and tasty pie filling with some fried onions. p>

In the religious context, the traditional Knish are still served today on special occasions: eg the first Friday after the birth of a son, or even to engagements or Bar Mitzvah.

All it takes to make Knish at home is a little bit of time. And a little more power. I enjoyed working on the dough for 10 minutes with my hands. Since it is quite firm, you have to work properly to knead it supple and roll out thin. The preparation of Knish is a real meditative workout in the kitchen. Very nice to switch off and develop upper arms like Madonna by the way.

Knish can be prepared as a single pastry or as a long roll. I tried both. As a finger food, the individual patties are better. The long roll goes a little faster and is sliced ​​a great side dish to hearty food.

Who has no desire or time to make the dough yourself, alternatively used a packet of puff pastry from the refrigerated shelf. However, he does not make beautiful Madonna upper arms. We understand each other, ne. 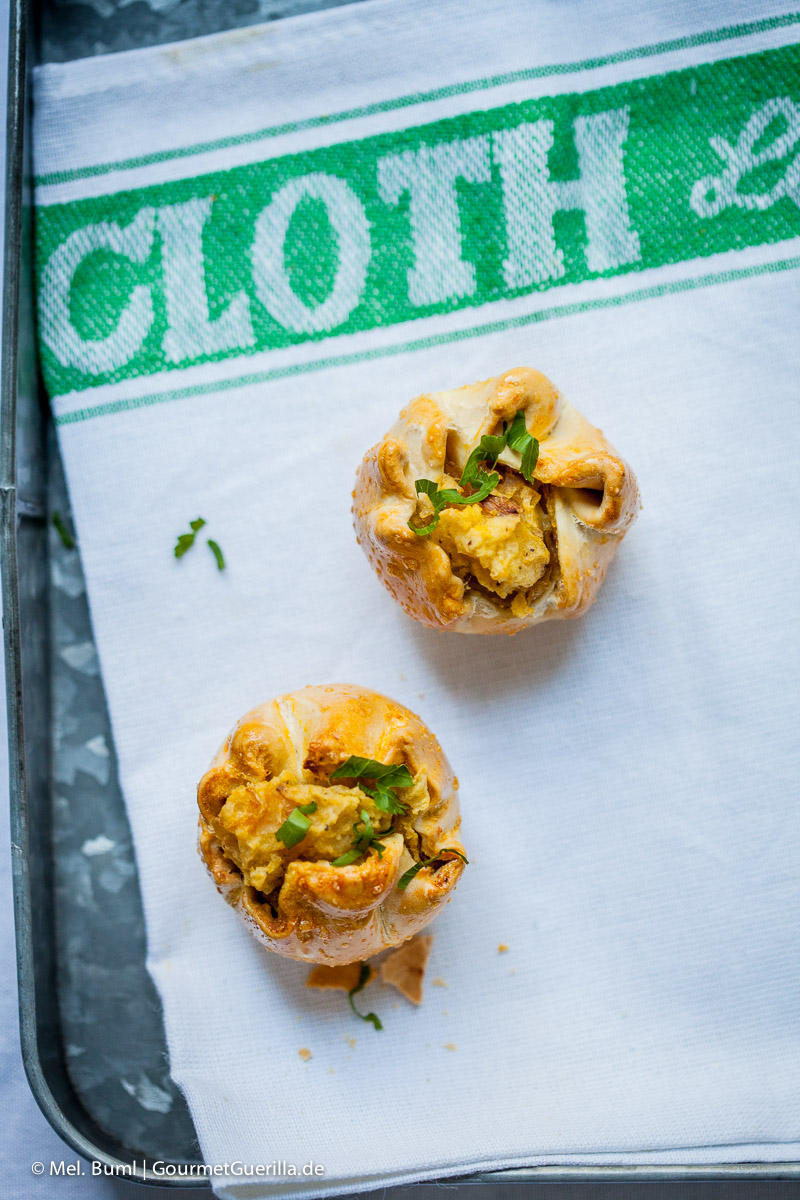 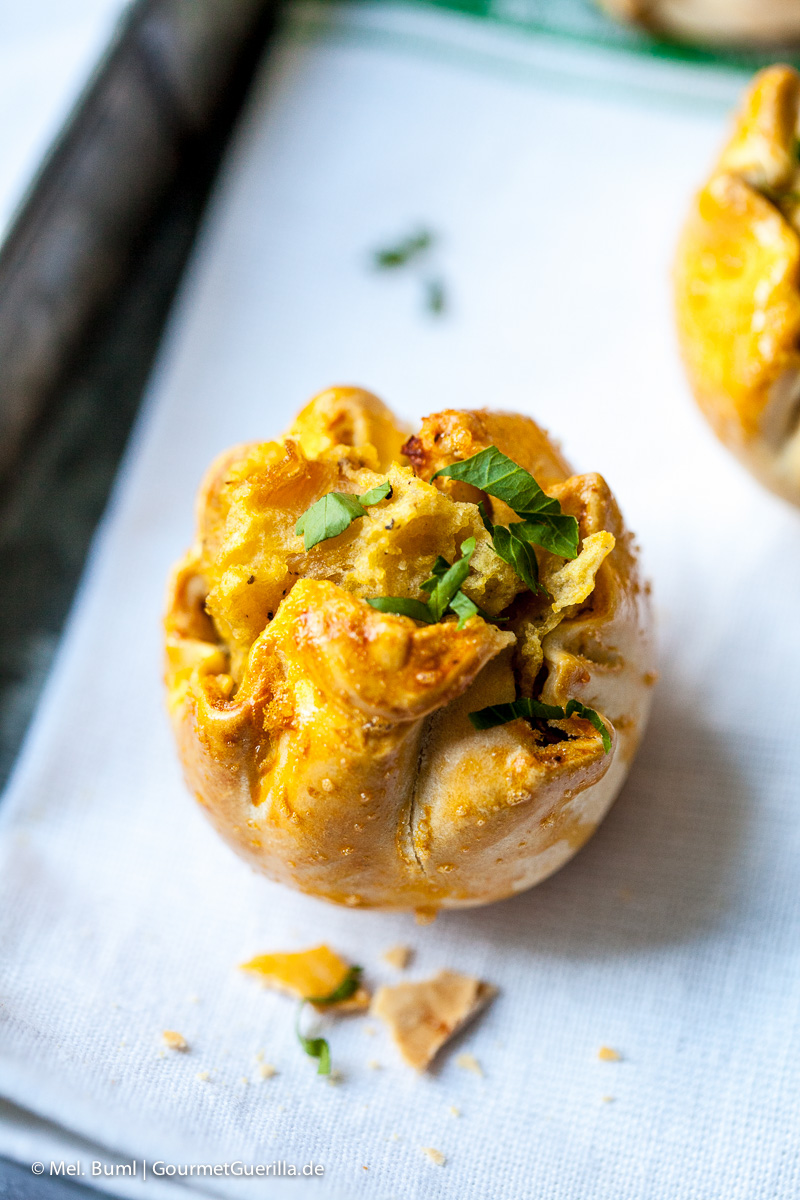 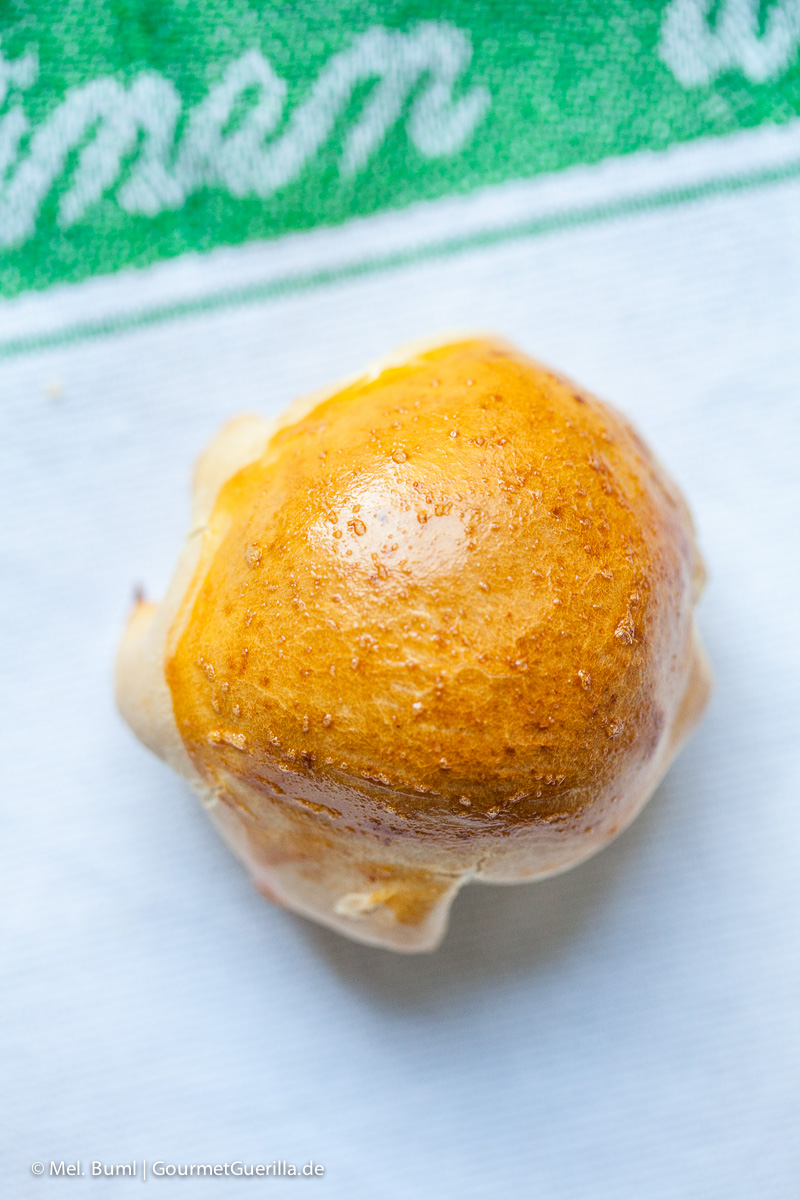 Here's how it works:
Beat the eggs with salt, baking powder and oil. Mix in the flour first with a fork and then knead vigorously with your hands for 10 minutes until the dough is smooth.
Put a little oil in a bowl, make the dough into a ball and turn in it. Cover with cling film and allow to rest at room temperature for about 1 hour.

In the meantime, fry the onions in oil or lard in a pan until golden brown for the potato filling. Boil the unpeeled potatoes in salted water. (Tip: In the pressure cooker, this is particularly fast). Quench the potatoes with cold water and peel. Press through a potato press or finely crush with the potato masher.Roll out 20 x 30 cm rectangle. Spread 1/3 of the potato mass along the long side and press down a little. Then roll up the dough from the long side and fold in the ends of the rolling pin.

For small pies
Roll out the dough thinly and cut out circles about 7 cm in diameter. Roll it out again very thin until a saucer-sized dough circle is formed. Put 1 tablespoon of potato filling on it, moisten the fingers and beat the dough edges over the filling and squeeze them together.

Whisk the egg yolk with the water and spread the pies on it.

Put the pies on Place baking sheet with baking paper and bake at 180 ° C for about 20-25 minutes - or until golden brown. 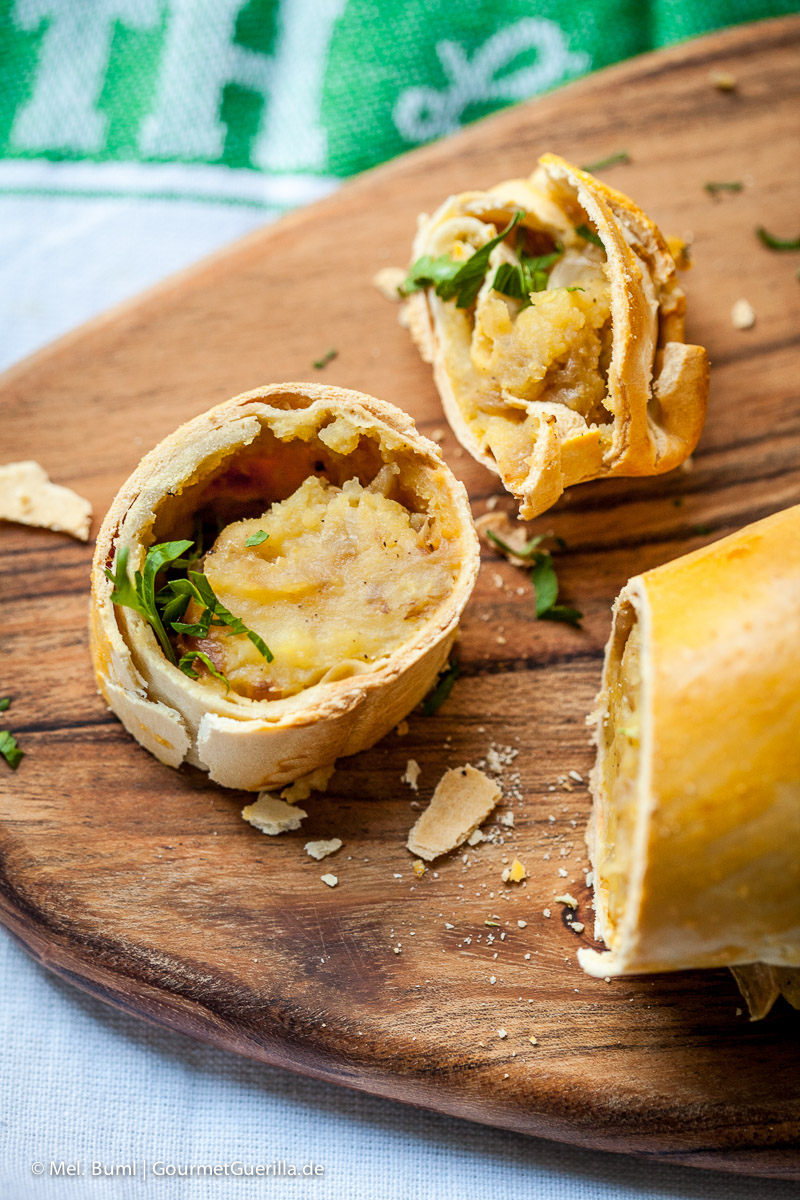